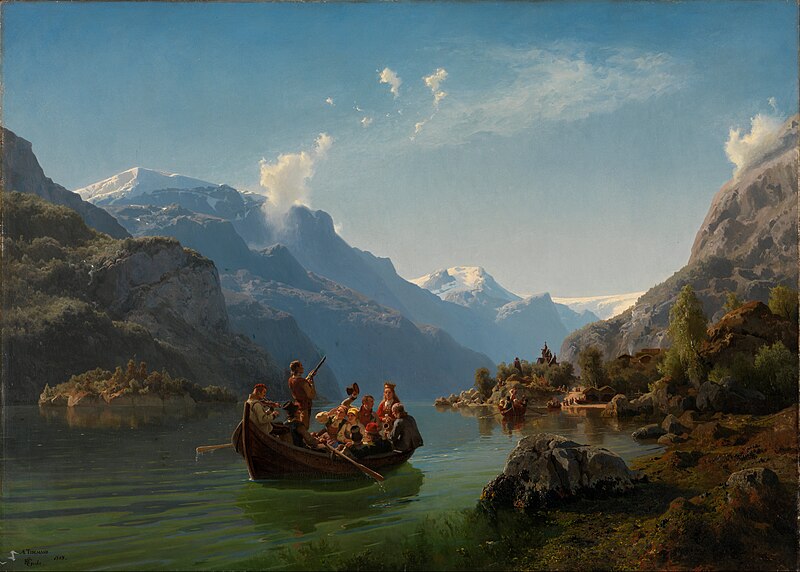 Last updated: 1/7/2016 // The Midwest has had a rich Norwegian history ever since the first wave of Norwegian emigrants came in the 19th century.

Norwegians are credited with being the first Europeans to discover North America. The Norwegian/Icelander Leiv Eiriksson reached America via Norse settlements in Greenland circa A.D. 1000, nearly five centuries before Columbus. It is generally agreed that the Norwegian settlers in Greenland founded the capital settlement of Vinland at L'Anse aux Meadows, and that their territory encompassed the whole of the isle of Newfoundland. Just how much they explored further past the Canadian Maritime Provinces (known as Skrælingeland in Old Norse; later Acadia and then Nova Scotia) in North America has been a matter of debate for the past hundred years amongst romantic and ethnic nationalists as well as some lay historians. Some widely disputed evidence suggests that Norwegians having made many settlements much further into the North American mainland than was believed before.

Norwegian immigration to America in the post-Columbian era began in 1825, when several dozen Norwegians left Stavanger bound for America on the sloop Restauration (often called the "Norwegian Mayflower") under the leadership of Cleng Peerson. The emigrants were primarily Quakers, though personal and economic motivations may have played a role. The ship landed in New York City, where it was at first impounded for exceeding its passenger limit. After intervention from President John Quincy Adams, the passengers moved on to settle in Kendall, New York with the help of Andreas Stangeland, witnessing the opening of the Erie Canal en route. Most of these immigrants moved on from Kendall, settling in Illinois and Wisconsin. Cleng Peerson became a traveling emissary for Norwegian immigrants and died in a Norse Settlement near Cranfills Gap, Texas, in 1865.

While there were about 65 Norwegian individuals who emigrated via ports in Sweden and elsewhere in the intervening years, the next emigrant ship did not leave Norway for the New World until 1836, when the ships Den Norske Klippe and Norden departed. In 1837, a group of immigrants from Tinn emigrated via Gothenburg to the Fox River Settlement, near present-day Sheridan, Illinois. But it was the writings of Ole Rynning, who traveled to the US on the Ægir in 1837 that energized Norwegian immigration.

To a great extent, early emigration from Norway was borne out of religious persecution, especially for Quakers and a local religious group, haugianere.

Norwegian immigration through the years was predominantly motivated by economic concerns. Compounded by crop failures, Norwegian agricultural resources were unable to keep up with population growth, and the Homestead Act promised fertile, flat land. As a result, settlement trended westward with each passing year. Early Norwegian settlements were in Pennsylvania and Illinois, but moved westward into Wisconsin, Minnesota, and the Dakotas.

Additionally, craftsmen also emigrated to a larger, more diverse market. Until recently, there was a Norwegian area in Sunset Park, Brooklyn originally populated by Norwegian craftsmen.

Between 1825 and 1925, more than 800,000 Norwegians immigrated to America—about one-third of Norway's population. With the exception of Ireland, no single country contributed a larger percentage of its population to America than Norway.Norwegian-Americans Today

There are more than 4.5 million people of Norwegian ancestry in the U.S. today[1]. Of these, approximately 3 million claim 'Norwegian' as their sole or primary ancestry.

55% of Norwegian-Americans live in the Midwest, although a large number (21%) live in the Pacific states of Washington, Oregon, and California.

Norwegian-Americans actively celebrate and maintain their heritage in many ways. Much of it centers on the Lutheran-Evangelical churches they were born into, but also culinary customs (e.g., lutefisk and lefse), costumes (bunad), and Norwegian holidays (Syttende Mai, May 17th) are popular. Certain towns in the United States, particularly in the Upper Midwest, have very strong Norwegian influences.

The 10 states with the most Norwegians

The 10 states with the top percentages of Norwegians

Universities with a strong Norwegian heritage:

Eivind J. Heiberg is the Honorary Consul in Minneapolis